I often go solo to events across the country.  My job is managing a team of 17, and then there is family.  I enjoy them both, but some times it fun to just do my thing.  Also going solo is an opportunity, an opportunity to me new people.  1998 National Narrow Gauge Convention, meet Pete Smith and the Gang from St. Louis and repeated that again at Sn3 Symposium in Pasadena.  2011 National NMRA convention, meet Rene Gourley.  2012 National Convention in Hickory, met John Rogers.  The 2015 Sn3 Symposium, met Steve Cox of Cascade Rail Supply.  Ah yes, had breakfast with Pete Smith and St. Louis gang and a few others too!

My second day of layout tours was a lot of fun.  Steve and I took in a number of layouts and talked about Sn3, kids, layout planning, etc…  At the end, we grabbed dinner before heading home for the evening’s clinics and such.

Here are a few photos from those layouts… 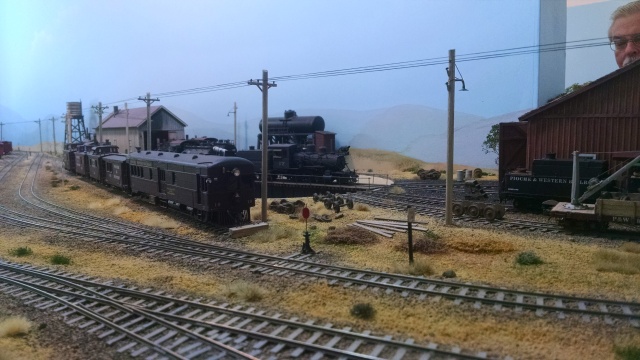 The Engine Terminal of Bob Christopherson’s Pioche and Western.  EBT Lee Rainey muzzle got into the picture.

Bob Christopherson’s Sn3 Pioche and Western was very nicely done.  This free-lanced railroad fit in 1/2 of a two-car garage.  It was one of the smaller layouts I saw, but it was one of the most complete and consistent layouts.  It told a single story.  Bob’s layout impressed Steve, as it showed what could be done with Sn3 in a smaller space.

The P&W’s primary purpose is to haul minerals from mine to crusher (or smelter or some such). The detail on teh layout is quite nice.

Bob has a nice town scene on one side of the backdrop. 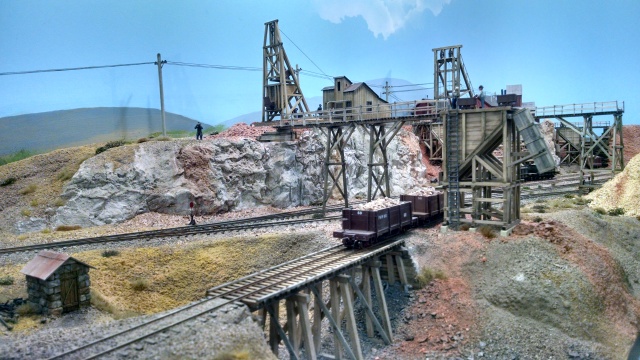 One of the mining scenes on the P&W

Bob uses this crew signup board. It is made out of styrene. It’s nice to be able to make use of the evergreen I-beams to form slides for name plates.

Dave Woodrell has a wonderful RGS layout.  It was my second time to see this layout (1998).  Again, his detail is very nice and the layout seems to run very well.  One thing I learned this time is that his layout has a provision for continuous run by going around an adjacent room. 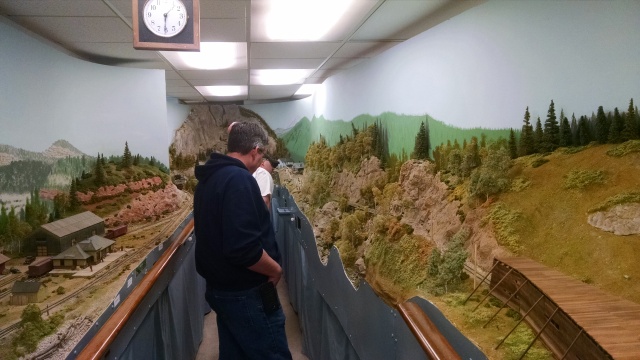 Here’s a shot of the layout looking toward Ophir. That’s Steve taking in the scenery.  Dave hosts operating session on the layout and must operate with a fast clock above.

Caboose 0404 on one of the trestles above Ophir.

Max Maginness was kind enough to open his Sn42 layout.  Inspired by New Zealand prototypes of his home country, this layout was a pleasant surprise.  Again, a smaller three town layout, but it was plenty interesting.  The locomotives and rolling stock were a contrast to the US prototypes had been seeing all day. 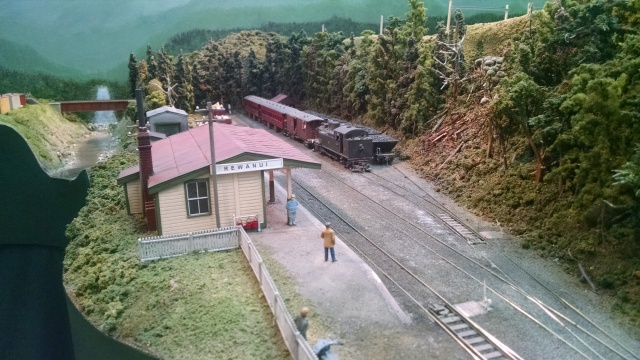 A mine scene on Max’s layout.

The sawmill if fit into an alcove in the layout room. This full-size S-scale model dominates one end side of the layout. 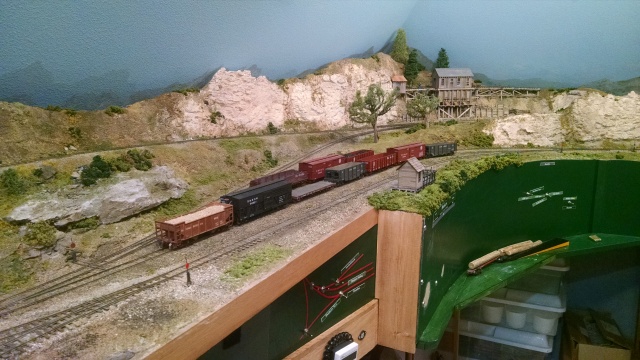 The switchback branch goes up to the mining district. Cars are exchanged in this yard. 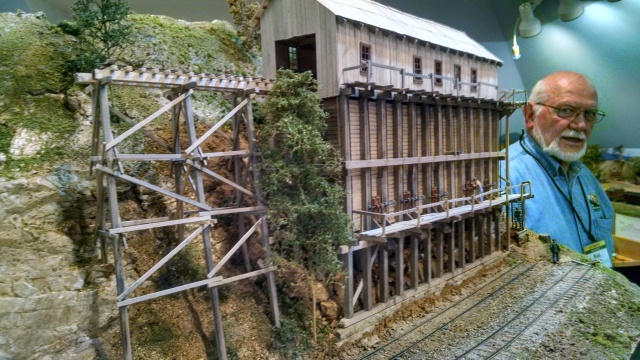 That’s Russ, behind one of his wonderful tipples.

Thanks to all who put on the 2015 Sn3 Symposium.  Another great event.  The Sn3 Symposium’s are great modeling railroading events.  I’d suggest them to anyone who can attend.

This entry was posted in Layout Tours, Uncategorized. Bookmark the permalink.