TNT in the Iron Age

As I may have mentioned five ex-Eastern Loggers (or in-active…) have joined forces as an informal group nicknamed TNT.  We’ve had a wonderful success rate, missing no more than 3 weeks in 9 months.   Most weeks, we work on Paul Miklos N-scale B&O layout.  We are trying to get it ready for the Op till you drop weekend of SWOOPS. But the group also meets to work on Don’s switching layout and has helped on my railroad room ceiling.  A few weeks ago we visited Phil’s place and ventured into the Iron Age.  Phil is an electrons guy with many interests.  Model railroading is just one of them.  But for the past few years he has been assembling his Iron Forge and now has a blacksmith shop in the shed.  TNT took a visit to learn and do.

Phil works the fire while Paul turns the fan that fuels the fire. It was interesting to learn how coal is piled near the fire to convert it to coke, and the coke is what goes into the fire. All fumes are drafted up through the hood and duct. 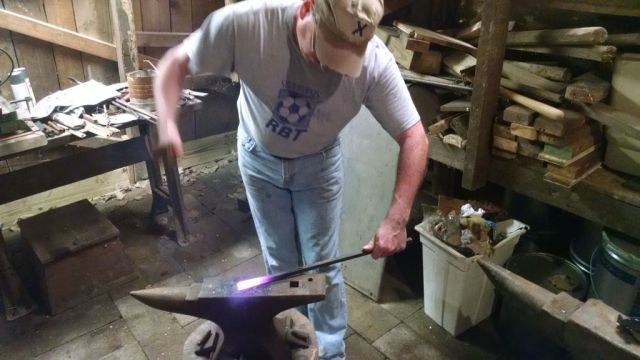 Phil shows us how it is done, how to “move metal”. 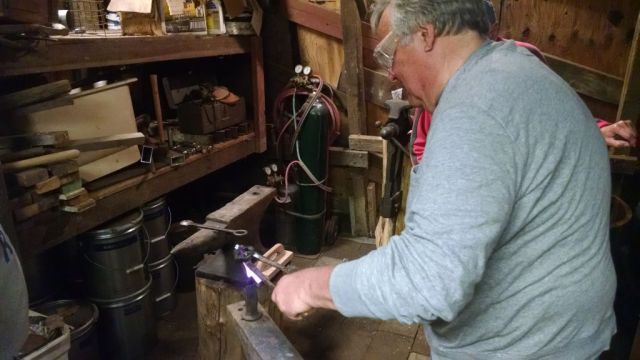 Paul is now is now showing his guns in moving metal. Might I say that Paul has shall we say, more finesse than Phil.

An overall view of the shed/setup. Don and Chris are watching Phil at work.

This entry was posted in TNT. Bookmark the permalink.