Harry decides to flip decks on his Sn2 SR&RL

Posted on January 2, 2021 by narrowtracks

A while back I designed a version of Farmington for Harry Downey. Recently he and I have been corresponding about the decks on his SR&RL layout.  As these discussions have progressed Harry has decided to flips his top deck for his lower deck.  Moving Kingfield and Bigelow to the top while Phillips and Rangeley get demoted to the lower deck.  He can do this because of his construction and because he’s not yet connected the decks.

Here are a few concept diagrams to show you Harry’s situation and you can watch a youtube video of Harry explaining his efforts.

Harry’s Kingfield deck. This was his lower deck. Notice the door at left. Would require him to crawl into the room. Raising Kingfield to the top deck makes it a 60″ nod under.

The middle deck is Strong an Farmington. This is a concept I proposed to Harry, to have all the circling around the with multiple tracks visible. Harry had been calling this the Helix Room. Is original plan was for a 4 loop no-lix to get from Kingfield deck up to Phillips. In the end, we each concluded that the distance between decks would be only 5-7″, to small to view. Hence I made this proposal for “helix room”

The Phillips deck. This is the concept for Phillips to Rangeley. Notice that it does not cross the door so makes sense as the bottom deck.

After reviewing the concepts and talking with Tom Sullivan, Harry is now planning for a lift.  Lifts are reasonable to consider when trains are short 4-6 actual feet.  They can actually be lifted by a human as Tom is currently planning to do.  I even posted a video showing how easy a human powered lift can be.  Harry has rejected the unguided human lift, so is still working out the details of a human power lift with constraints.

Here are the concepts of how the lift might fit into the room.  The lift itself when at the top position (Kingfield deck…now that it is to be the top)  will allow a human to walk into the Lift Room (new name for the Helix room) to walk under the lift.  Strong still requires a lift up to allow operators to pass by too.

The concept diagram for the top deck, Kingfield level. 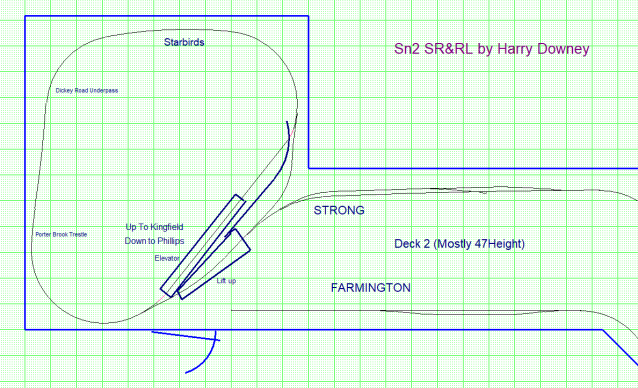 Middle, Strong to Farmington Deck. The lift has tracks entering from both sides and there would be a lift up just north of Strong as tracks go north to Phillips, enter the lift, and get lowered to Phillips.

As of 1/2/21 Harry is process of swapping the upper and lower decks.  I look forward to seeing how he progresses in 2021!

This entry was posted in Layout Design. Bookmark the permalink.