A look back…  The original Sn2 layout traveled to Gary Kohler’s 2-Foot meet, later the Midwest 2-foot show.  The original layout sections were built form 4″ of foam board, laminated with plywood and Masonite.  Gary Kohler provided the photos, he thinks they were probably taken by Craig Stratton.   One print is documented as being 2000, so I’m guessing the other two are the year before and the year after.

The first year, I had just started on the Phillips sections. Track (Shinohara HOn3 flex and #6 turnouts) was in place but not wired.  Nor did I have a locomotive.  I took it to promote Sn2 and to determine how the design would travel. Mark Harris brought the equipment and painted Strong depot. The Phillips depot mockup is at rear.  Mark sold me some of the equipment (not the caboose nor passenger car) as he’d move onto On2 by then.

2000 was the first year of the full loop. Again Mark brought more rolling stock and again I bought more of it (but he continued to hold onto the caboose and passenger car). I had motive power this year, an Sn2 critter.  The view is looking over Strong to Phillips at the far end. The mockup is of the Strong Creamery.

The layout looking from Phillips back to Strong. In this 2001 or 2002 photo, one can see the Salmon Hole bridge at right. Scenery was started too. The dickey bridge is barely visible beyond. I’m the guy with the camera talking with Al Churella. Al probably has his 20′ feet of On2 SR&RL from Rangeley to Marbles.  This year, the setup was round tables, and I was just beyond the cafeteria.  So folks pulled up chairs to eat at the layout and watch trains go by.

Appearing at the 2003 Sn3 Symposium in St. Louis. This shot shows Salmon Hole bridge and Dickey Rd. Overpass behind. The scenery is much improved. 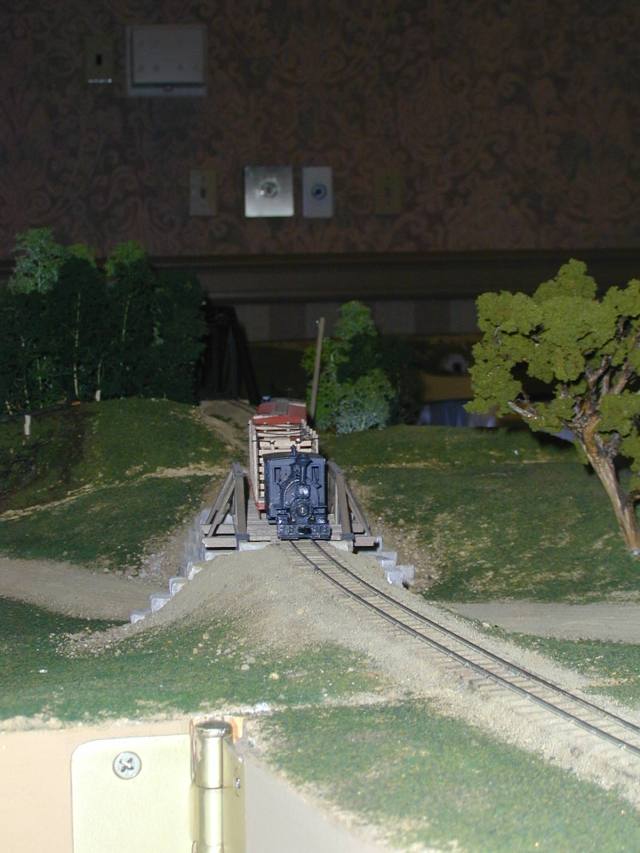 A Backwoods Miniatures 0-4-0 porter pulled the trains during the Symposium.  Here it is heading over the Dickey Road bridge.

One of two Gilpin cabooses on the rear of the train. This view is similar to prototype photos taken from Dickey Rd.

The setup of this layout was easier than setting up the Free-mo modules.  I did not have to cart legs around.  Just lay the section on the tables and pin and bolt them, plug in the wiring and add the connector rails.  I and running in an less than 2 hours.

This entry was posted in Layout #1 - Portable, Layouts. Bookmark the permalink.