My 3rd SR&RL was more grand than the first and the second or first.  It reused the Strong, Philips and connecting trackage from the my first SR&RL.  Phillips was now an operating location trains passed through on their ways to Redington and onto the Rangeley staging yard.  Strong got built completely and continued on down to Farmington.  Farmington was highly compressed, but more than a staging yard but had sufficient number of tracks to switch.  There was a provision for the F&M to Kingfield (reversed) and on to Bigelow.  Starbirds trackwork got into place for switching and a module got built for Kingfield but never any trackwork.  This version even held operating sessions for the 2005 NMRA national convention.  The T&T large Forney’s were running for that event.  I had lots of fun working on this layout and had a layout construction group of friends.  Jim Stewart helped on lots on all three versions of the layout….I think he remembers most the two days in the spring of 2006 when we tore it down.

SR&RL Version #3. Strong and Phillips form the first SR&RL again appeared on this version. Strong got completed as did the trackage in Farmington and track through Phillips to Readington and onto Rangeley staging. The continuous loop got completed and Starbirds track was in place. 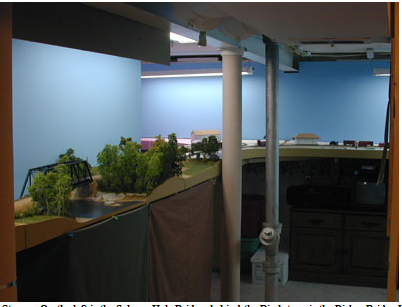 These are the same scenery sections used in the 1st SR&RL only viewed from the back. Salmon Hole bridge is at right, Dickey underpass is beyond and then to Strong beyond. Phillips would be to the left. 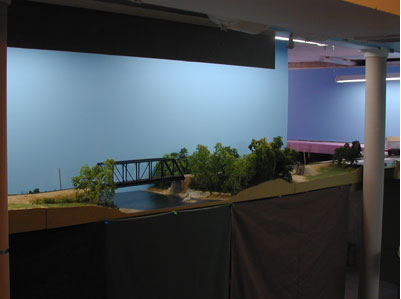 A more direct view of the Salmon Hole bridge and the fill leading to Phillips on the left. 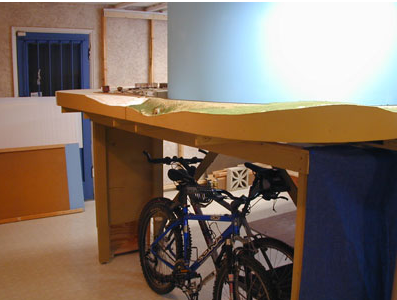 The approach to Phillips as trains were on the outside of the backdrop. My Mt. Bike (I still have it) fit nicely under the layout. 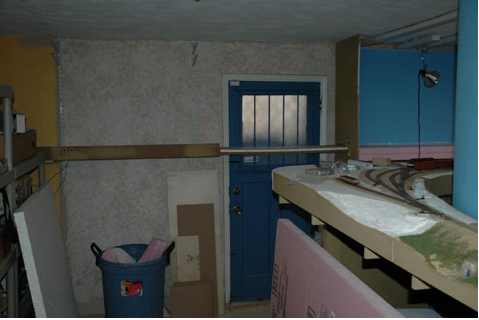 Phillips is at right. The turntable might be in place along with the other tracks. There was a gap between the module and backdrop, but many could not see it because of the height of the railroad. Readington is the pink foam beyond Philips.  Rangeley staging yard (4 tracks that ended at a turntable) is to the left of Rangeley.  There was an approach that hinged up for the door, should I want to open it.  But that door was to the backyard so never did.  I had walk in access from the garage. 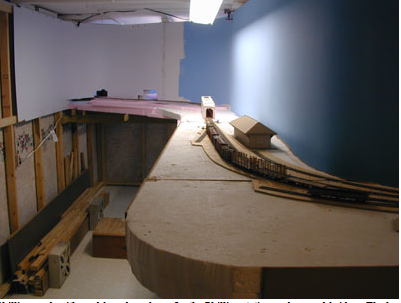 Here is Philips before the track was completed to Readington. The backdrops were styrene and hollow core doors were placed upright on edge to hold it up. The continuous run back into Strong went through the backdrop. 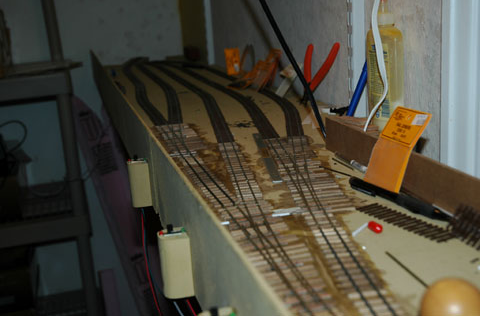 Rangeley staging under construction. The turnouts were condoled by slide switches mounted to the outside of the fascia. This control was used on all of the new sections of the layout. The turntable was at the end and had a slow motion motor without indexing.

I know there are better images of the layout.  I think I have some from the 2005 NMRA national convention op sessions.  I had about 100 visitors to the layout as I was on the LDSIG tour and the opsig tours.  I never got it fully running, but it was a fun and manageable project for a 34 year old man. 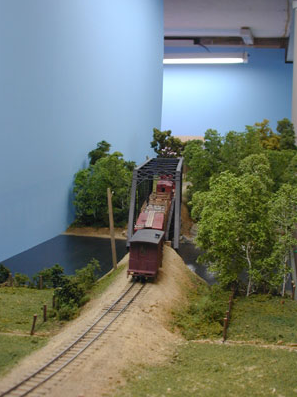 One more parting shot of a train crossing Salmon Hole bridge on it’s way to Strong.

This entry was posted in Layout #3, Layouts. Bookmark the permalink.